As told to Audrey Fish 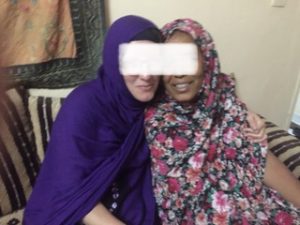 The hazy sky carried a mild, oceanic breeze through the stifling African noon heat. Searching for a cool reprieve, I slowly sat on the sturdy step of the stucco building, gently laying my Bible down next to me. Absentmindedly, I  grabbed a pile of the warm, gritty sand surrounding me and sifted it through my fingers as the wind softly whistled inside my ears. Suddenly, an outburst erupted from the dim room behind me. I glanced behind my back at the two women, their heads studiously bent over a worn journal. Tala, the Arabic tutor, sharply and angrily tapped the words on the crumpled page as she impatiently tried to explain something to Jenny, my coworker. I smiled inwardly and turned back around to stare at the dusty terrain again.

Tala, an Arab-Berber widow, was an extremely religious Muslim. All her life, she had never known much about Westerners; in fact, Tala had been certain of only one thing about them: white people gave medical shots. Yet there was something very different about this pale-skinned woman from another land.

Through Jenny’s dogged determination, God was performing miracles and bringing changes to Tala and other widows’ lives. Jenny had initiated a sewing project for females at our vocational training center, financed by MercyWorks. The staff sold high quality products to provide income for the women so they wouldn’t need to give themselves over to prostitution, trafficking, or begging. 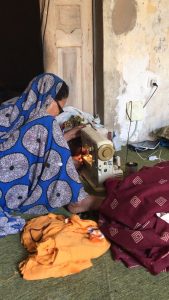 As time passed, Jenny told me about Tala, who often showed up at her doorstep late at night. While Tala wanted to sell the many products she sewed, they were usually of poor quality. Jenny earnestly tried to help Tala improve her sewing skills, yet the stubborn woman resisted. In spite of Tala’s critical and intimidating personality, Jenny steadfastly loved her with the strength of the Holy Spirit. My coworker’s patient kindness towards Tala despite regularly being verbally abused by her amazed me.

One day, our team received devastating news: Al-Qaida terrorists had shockingly killed Jenny’s husband, and Jenny and her children had to be taken out of the country immediately. Just a few months later, Tala’s older brother, a policeman, suddenly died. 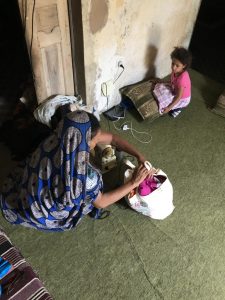 Perhaps it was the reality and closeness of death for herself as well as for Jenny that stirred something inside Tala’s heart. At long last, the seeds of curiosity sown in Tala’s heart through months of intentional interaction and love were finally starting to bloom. Shortly after her brother’s death, Tala approached another worker and me and told us she wanted to follow Jesus. My heart raced as we led her through prayer and repentance. Within the week, Tala was baptized! In no time, everyone who knew Tala was amazed at the joyful woman she had become.

The next time Jenny returned to the country, she was astounded to see the harsh, insensitive individual she knew a year ago was no more; instead a genuinely compassionate, loving woman stood in front of her. God had worked an incredible dmiracle that Jenny had barely dared to believe possible, reinforcing the truth that with God, ALL things are possible (Matt. 19:26).

In addition to her profound internal transformation, Tala improved her sewing skills and became an adept seamstress— soon enough, the team could sell her products. Today, Tala remains diligent in her work.  Her sewing skills  provides not only a living wage for herself, but also for the daughter she adopted!  Truly Tala’s redemption story is one of God’s ‘hidden treasures’!

MercyWorks is committed to helping provide life-changing opportunities for people in circumstances similar to Tala’s. It is through God’s faithfulness and the generous provision of His people that we help lift people out of extreme poverty by equipping them to create a stable means of income.